Carl Schmitt, one of the most influential and controversial 20th Century political thinkers, continues to elicit heated debates thirty years after his death. Born in 1888, Schmitt first came to prominence as a legal scholar in the Weimar period before joining the Nazi party in 1933 and setting the legal and theoretical foundations for the future Nazi State, thus becoming “the crown jurist of the Third Reich.” A trenchant critic of liberalism, parliamentary democracy, and liberal cosmopolitanism, Schmitt defended a conception of the state in which the sovereign is “he who decides on the exception.” Though virulently anti-Semitic, Schmitt eventually found himself at odds with Nazi officials and was pushed aside as early as 1936 — though he retained a professorship at the University of Berlin. After the war, Schmitt was shunned from the German academy but continued to write, publish, and exert considerable influence in a wide range of fields including political theory, legal and constitutional theory, international relations, and policy making. As such, his work remains an indispensable key to understanding modern politics.

Faced with such a complex and controversial thinker, we asked comparative philosopher and Brooklyn Institute for Social Research founding director Ajay Singh Chaudhary to tell us more about Carl Schmitt, his legacy, and why his work remains so influential today.

What is it that makes Carl Schmitt’s contribution to politics and political theory so unique?

One of the unique contributions – and there are several – that Schmitt makes is his idea of the friend/enemy distinction. This insight is simultaneously elegant and incisive. Schmitt goes through a series of analyses of what the guiding questions are in other forms of inquiry – questions which are often conflated with politics – asking what do each of these analytic modes tell us. For example, in aesthetics, Schmitt argues, we are distinguishing beauty from ugliness; in morality, good from bad; in economy, advantageous from disadvantageous and so on. So what then is specifically “political”? Schmitt alights on the answer: in politics, we distinguish friend from enemy. What does this mean? That the most important political question – as ironically for Schmitt the old labor ballad would have it – is, in some sense, “which side are you on?” Schmitt argues quite against the grain of nearly all other political thought that this enemy need not necessarily be ugly, bad, disadvantageous, and so on but that, quite simply, they are a potential object for state violence, war, or perhaps, simply, political coercion.  This may seem overly schematic but actually Schmitt’s thought can be quite flexible here. The political can’t simply be one of these other categories. It might be that it coincides with a moral, aesthetic, or economic judgement but in such cases it is an intensification of such quality that it acquires a distinctly political dimension– a transformation that can still be distilled to the specifically political. This idea may also seem repugnant (and therefore to be avoided or discarded) but we fail to grapple with the seriousness of Schmitt’s analysis – and what it means for real politics in the here and now – at our own peril.

Another famous contribution of Schmitt’s is his idea of “political theology.” Can you tell us more about it?

It can be easy to confuse “political theology” and “religious politics” — an equally interesting but largely different topic! Political theology is not about “faith” or “ritual” but how theological structures, concepts, and ideas shape, relate to, or are analogous with political ones. For someone like Schmitt, who grew up a fairly staunch Catholic, political theology had nothing to do with the actual existence or non-existence of “God” but rather with how “God’s” relationship to nature and to humanity accurately described and elucidated the sovereign’s relationship to law and the subject.

What is Carl Schmitt’s legacy in contemporary political thought?

Schmitt really does have multiple legacies. In post 9/11 America, one finds an increasing number of Schmittian ideas in neoconservative thought and legal debates, a trend which is not usually acknowledged at a broader theoretical level. Since the 1970’s, there has also been a resurgence of interest in Schmitt and his influence on Weimar political and social thought, as well as an attempt among some quite prominent continental political theorists (think for example of Chantal Mouffe or Giorgio Agamben) to create a new, for lack of a better phrase, “Left-Schmittian” politics. 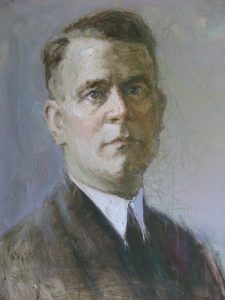 Well, for one thing, Schmitt’s understanding of international politics really begins at home, so to speak. The “enemy” might be foreign or domestic but it is that which your political entity, and identity, is defined against. According to Schmitt, the “enemy” is “the other, the stranger… in a specially intense way, existentially something different and alien…” such that one is able to go to war with this group. This distinction between friend and foe is precisely what constitutes the essence of the politics but it does not mean that one needs to go to war with one’s enemy, but merely that one can. Crucially, as mentioned before, the “enemy” is conceptually distinct from the “evil.” You may have “good” enemies and “evil” friends. Schmitt also argues — and this may seem counter-intuitive to many readers — that it is liberals, with their continued insistence that war can be justified on sociological or moral grounds and their habit of defining their enemies as truly “evil”, who lay the groundwork for absolute and endless war. Thus, against popular discourse, Schmitt argued that the logical conclusion of the liberal international order was a constant, existential war to the finish. Here one might dispute much of what Schmitt assumes and proposes, but in light of the United States now decades old “war against terror,” his critique of the liberal international order could hardly seem more current.

What is it about Carl Schmitt’s critique of liberalism that explains his continuing influence on political thinkers at both ends of the political spectrum?

Although there are many interventions in political theory that criticize the liberal order, there are relatively few thoroughgoing challenges to its most basic logic. Most political challenges are “fixes” – expansions of rights for example, or increased participation and representation in institutions – which, while posing serious challenges to existing political powers and interests, accept the liberal order on its own terms. One of the only systems of thought, or approaches to political and social organization, which doesn’t do this is Marxism in most of its iterations. Another, is the kind of anarchism which denies even a transient role for the state, but this has always been ill-defined and had very little to say (for obvious reasons) about, say, policy or the workings of political institutions. I think that part of Schmitt’s appeal is that he offers an entire critique of the liberal order — clear, cogent, and frankly more compelling than I am sometimes comfortable with — that undoes liberalism’s basic logic. This appeals, I think, to many of those who are cut out from the liberal consensus whether to the right or to the left.

Faculty Writing: On the Illiberal Appeal to Religion, and Our Changing Relationship to Work