“Man is born free, but is everywhere in chains.” So began Jean-Jacques Rousseau’s On the Social Contract, one of the first modern meditations on how democracy, autonomy, and self-government can overturn the rampant inequality found in human society. There, the 18th Century Genevan philosopher provocatively claimed that it was excessive social and economic inequality, rather than natural differences, that account for unfreedom and alienation. Ahead of his time, he proposed a radical new understanding of civil society that would greatly influence the French Revolution and modern political thought. To situate Rousseau within his philosophical and political context, we asked BISR faculty Michael Stevenson to tell us more about his thought and his legacy.

In the United States people are not always familiar with Rousseau beyond his status, along with Hobbes and Locke, as founding figure of the liberal tradition. Can you tell us more about Rousseau and what characterizes his thought?

I think Rousseau is most interesting precisely in what distinguishes him from figures like Hobbes and Locke. Consider how the latter two would answer the question Rousseau addresses in his famous “Discourse on Inequality”: “What is the origin of inequality among men, and is it sanctioned by natural law?” Hobbes and Locke will give different answers to the first part, primarily about what accounts for political and economic inequality, but they would both answer the second part with a resounding “yes”! That is, they both see inequality ultimately as “natural,” and are engaged in trying to justify and legitimize the inequalities that already exist in society; they are, at heart, apologists for the status quo. To my mind, Rousseau provides, if not the first, then the first really important and convincing argument that existing reality itself, in what we would probably today call “modernity”, is deeply and fundamentally flawed. Rousseau is a much more radical thinker.

A famous anecdote says that the only picture present in Kant’s sparsely furnished study was a portrait of Rousseau. In what ways did Rousseau influence Kant, and what aspects of his thought carried on in the Continental philosophical tradition after Kant? 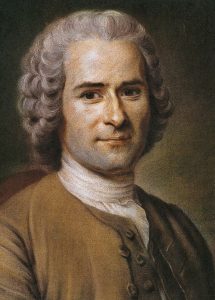 In a word, his conception of freedom. Rousseau originates a particular tradition and way of thinking of freedom that not only fundamentally inspires Kant’s moral thought, but the social and political thinking of figures like Hegel and Marx. That is, freedom understood not as independence from external influences like laws and communal attachments, but a kind of deeper or higher freedom that is manifest precisely through communal identity and collective activity.

What made Rousseau such a controversial figure in his own time?

I think it’s probably due to what I alluded to earlier. Rousseau was convinced that social and political reality was broken, that existing institutions have mutilated human nature and created large amounts of unnecessary misery and unhappiness. His writings are very persuasive in this regard. On one hand, it’s not hard to imagine that many did not like the image of themselves they saw reflected in his work; on the other hand, it’s easy to imagine the inspiration they provide for those interested in creating fundamental change in the existing order of things.

At a time when inequality is on the rise, what kind of insights on our current political situation can one gain by reading Rousseau?

This is where, I think, Rousseau is most interesting. For Rousseau the real human value is freedom, but he thinks freedom is only attainable under conditions of relative equality. While the origin of inequality doesn’t exactly lie in our political institutions, the latter function in ways which tend to maintain and support those deeply entrenched inequalities preventing us from really being free. Thus, the solution has to take place on the political level. In this day and age, I think we would do very well to reconsider both the kinds of political institutions Rousseau thinks keep us unfree (and I think it’s abundantly clear he would include our own in these, and increasingly so), and the type of political structures he suggests promise to be genuinely emancipatory.

To learn more about Rousseau and his work, join us for our upcoming course Rousseau: Inequality and Democracy which starts May 12th at the Brooklyn Commons.

Faculty Writing: On Fighting for Reproductive Justice, and Unwanted Pregnancy as Forced Labor

Faculty Writing: On the History of the IWW, and the Politics of Expert Parenting Advice

Faculty Writing: On the Necropolitics of Reproductive Freedom, and Co-Existing with Viruses