From the emergence of BDSM in the 1980s to Fifty Shades of Grey, sadomasochism has recently freed itself from the pathological categorization imposed upon it by the medical establishment in the early twentieth century. Aside from the many questions this shift in perception raises about our changing notions of sexuality, gender, and interpersonal power dynamics, sadomasochism, understood as a dialectic of submission and domination, can also illuminate our understanding of desire and recognition in a specifically political context. Indeed, from Rousseau’s Confessions and Hegel’s master-slave dialectic to George Bataille’s critique of capitalism and Michel Foucault’s docile bodies, plain and pleasure, domination and submission, coldness and desire have been central themes in modern political thought. Why is this the case and what can it tell us about ourselves? To begin answering this question, we asked BISR faculty Samantha Hill to share her thoughts on the subject in advance of her upcoming course: Sado-masochism: Economies of Desire and Recognition.

For most people, sadomasochism refers to a kind of sexual practice that involves pain, domination, and submission in the context of a private agreement between two individuals. In your upcoming course, you propose to bring this framework to bear on works, ideas, and concepts within modern Western political thought and philosophy. Why did you want to make this connection? What is to be gained in doing so? 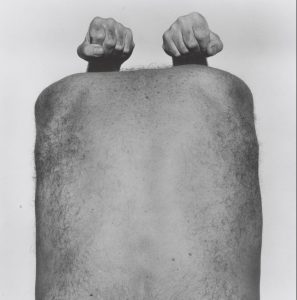 John Coplans, Self-Portrait (Back with Arms Above), 1984

I didn’t want to make this connection so much as this connection already existed. I started thinking about the relationship between desire and political recognition while reading Jean-Jacques Rousseau’s Confessions. I was struck by the way his discussion of sexual arousal and desire gave form to the way he understood power relationships within society.

We can gain a lot from re-thinking desire in relation to political life. One of the questions at the heart of this class is whether or not desire can be a productive force, or even a mode of resistance within capitalist society. In Theodor Adorno and Max Horkheimer’s The Dialectic of Enlightenment we see how domination of nature leads to the domination of men, and how the logic of domination is taken to its extremes in the chapter dedicated to the Marquis de Sade’s famous novel Juliette (1797). For Adorno, the organized pyramids of pleasure in Sade’s novel perfectly represent the logical limits of Enlightenment thinking. If desire is subjected to the logic of rationalism, then it becomes a commodifiable form. And this is where we see a relationship between desire and political recognition emerging. How do we come to know our own desire? How does that knowing shape relationships? Parents and children, masters and servants, teachers and students, presidents and citizens.

The term “sadism” refers to the infamous late eighteenth century Marquis de Sade while “masochism” comes from Leopold von Sacher-Masoch, a nineteenth century Austrian writer and journalist who wrote extensively about his masochistic tendencies. Both terms were coined in the 1880s by German psychiatrists looking to describe what was then considered abnormal behavior and later taken up by Sigmund Freud who laid the groundwork for the medical understanding of sadomasochism as pathology for decades to come. Through this brief chronology, we can see that sadomasochism was first formulated, theorized, and pathologized in the nineteenth century, precisely as Europe was going through what Eric Hobsbawm called “The Age of Revolution” and “The Age of Capital.” What kind of parallels, if any, can we draw between these chronologies? What are the underlying material conditions and historical developments that can explain the concurrent appearance of sadomasochism and Hegel’s master-slave dialectic?

That’s a great historical, materialist question. I can’t give a single answer. My personal instinct is that it has something to do with the way our perception of the world changed alongside the changing modes of production and commodity exchange relations. In part, the language of sadomasochism is so interesting because it speaks to the primacy of the subject object relationship in critical theory. How are individuals transformed into laboring objects that can produce surplus value? How is desire produced and managed? In Hegel’s infamous master-slave dialectic, we see how the slave relies upon the master for recognition, but the master is capable of exercising their agency without the recognition of the slave. This leads to all sorts of interesting questions about the movement of the dialectic that we’ll discuss during the first week of class. Not un-coincidentally alongside Georges Bataille. For Bataille, the languages of dominance, submission, pleasure, and suffering is inseparable from the way he sees capitalism developing as a form of commodity relations in industrial society. In his writing on The Accursed Share (1949), Bataille describes class relations in terms of servility and the excessive nature of the bourgeoisie. The idea of sovereignty arises out of a certain understanding of excess; it is a form of radical freedom that undermines rationalism.

On the other hand, sadism might be understood as a form of sovereign authority that individuals, or a collective submit their will to. In this sense, the social contract is necessarily one of submission. Wendy Brown has a great essay on Freud in which she discusses the liberal subjects masochistic desire to be punished. We trade certain goods, social pleasures for a kind of relationship with an other that can acknowledge our individual desire and grant us recognition and so rights. In entering into that relationship we sacrifice a certain amount of our autonomy as individuals to the will of the master. The flip side of that is that the sovereign, or master, relies upon the submission of the subjects in order to rule effectively. This is an old reading of sadomasochism that tries to reclaim subjectivity for the submissive subject.

I would start by saying that it’s not a fixed framework. By the nature of the topic, it is always moving. Desire remains fluid. When Walter Benjamin discusses eros in relation to truth, for example, he understands it as the pursuit, never the acquisition. In that spirit, this way of thinking about political recognition fundamentally moves us away from rational forms of logic that reify capitalist modes of objectification. Put another way, eros as a mode of political recognition allows us to approach the object of desire without enclosing it, or foreclosing it. It allows us to remain in an aporetic space, which in itself can be a form of resistance. How can we move away from fixed perceptions of reality? From the time we’re born we’re told who to love, who to desire, who we should recognize—erotic desire, as a way of being, allows us to move away from these fixed perceptions that are embedded in our ways of thinking about the world.

And, yes, the contemporary moment. One way to address this question would be to think about how we take on submissive subjectivities within the framework of society, how our economic position makes us dependent upon others in order to take care of ourselves. Many of us are bounded to necessity, and this is a dangerous position to occupy. Sadism and masochism can exist apart from one another as frames of thinking. The merging of the two, to go back to the previous question, in some ways represents the codependent nature of liberal governance, where one requires an other. If we can treat sadism apart from masochism, then we open up frameworks for thinking about the nature of political sovereignty and desire that are not bounded.

Speaking of the contemporary moment, Facebook gave us a hard time with this class. They took down our original class event posting because they thought it was pornography. The messages said: “We don’t allow images or videos that show nudity or cleavage, even if it’s portrayed for artistic or educational reasons.” And, “Your ad wasn’t approved because the body/title text calls out to specific user attributes.”  I’m not going to comment on the ridiculousness of forbidding décolletage, but this is incredibly ironic and reflective of the ways in which certain kinds of contemporary political expression – for example the desire for a “master” or “guardian” to safely curate our “real” from “fake” news for us – hands extraordinary power right back to those places in which it is most concentrated. It also perfectly highlights the limitations of bureaucratic language, and how unreconstructed enlightenment thinking undermines the possibilities of desire.

If you want to learn more about this topic, please join us for Samantha’s upcoming course, Sado-Masochism: Economies of Desire and Recognition, which will begin Thursday, March 5th at Artbook/D.A.P.

Faculty In the Media: On Expanded Criminal Punishment for Abortion Seekers, and How to Do STS as a Feminist

Faculty Writing: On Epistemic Injustice in Psychiatric Practice, and Coming of Age through Geek Culture

Faculty in the Media: On the Backlash to Police Abolition, and Understanding Religion through Storytelling