The Podcast for Social Research, Episode 20: The People’s Summit

The twentieth episode of the Podcast for Social Research was recorded live June 9-10 at “The People’s Summit” in Chicago, Illinois! BISR executive director and core faculty Ajay Singh Chaudhary and program coordinator (and future organizing fellow) Audrey Nicolaides sat down with Maria Svart of the Democratic Socialists of America, Sarah Leonard of The Nation and Dissent, and Lina Khan of New America. We had to change mics at least once (hence the sound fluctuations for the first ten minutes or so of Maria’s conversation), we recorded simultaneously for podcast and live video (hence the constant confusions between “listening” and “viewing” audiences) and Audrey lost her voice almost immediately but we had fascinating and far-reaching conversations with our guests about contemporary American politics, socialism, praxis, political strategy, human emancipation, journalism, epistemology, internationalism, political economy, anti-trust, and some brighter possibilities in dark times.

You can download here by right-clicking and “save as” or look us up on iTunes.

Ajay’s Note: Pardon my introducing myself and Brooklyn Institute like seven times, required for the video live-stream!

All three of the conversations we recorded for this podcast were complementary but fairly different. We went from direct discussions of organizing and ideology, to media, messaging, and the unexplored horizons of left thought, to some thorny issues of contemporary political economy, monopolies, and law. All these conversations took place at the People’s Summit at which so many different political, labor, non-profit, media, and education organizations were coming together to help build and organize a more cohesive and coherent left in the United States. While there is obvious unity in opposition to both our current government and the severe shortcomings of our collective social, economic, and political moment, it might seem difficult to connect them all together in a way that seems artificially deceptive to me (and perhaps due to the nature of medium and three separate recordings as well.)

There is, I think, one thread, though, weaving all these conversations together. It is both a recognition of the need to remember and recover some of the more radical moments of the past while putting aside decades and decades of being in a defensive mode of political thinking and strategy on the left to understand the needs of the present moment. The politics of this moment must be informed by the revolutionary traditions of the past – it is the centenary of the Russian Revolution after all – but cannot be bound by those limitations whether those lean toward mimetic replication of romanticized heroes, halfhearted further diminishment of the withered remains of the welfare state, or the reactive, defensive politics of anti-communism (so influential for so long even on the American left.) There is an incredible candor to this political realism in these conversations that stretches from the ethics of organization to the details of policy to the frank admission that there is a lot we haven’t figured out yet for the 21st century left. There is, I think, also a commitment to a more expansive view of emancipation than sometimes on view even among the self-appointed left. The immediate horizons of issues like universal healthcare or market concentration are in plain view in these conversations but under-girding those questions is a vision that life should be richer, in every sense of the word, for everyone. A radical vision if ever there was one.

Technical Details: Recorded on a Samson CO1U into a PC running the freeware program Audacity while remarkably underslept, but consuming enjoyable, yet moderate, amounts of complimentary domestic beer, coffee, and Chicago tap water.

Support the Podcast on Patreon

We enjoy producing the high quality and in-depth content that appears on the podcast, but it also takes time and resources. If you appreciate what you hear, consider supporting the podcast!

Become a Patron
Mailing List
To receive our newsletter with upcoming news and announcements, please enter your email address.

Podcast for Social Research, Episode 57: At Year’s End with the Angel of History—2022 in Review

The People’s Summit
Maria Svart
Democratic Socialists of America
Sarah Leonard
The Nation
Dissent
Lina Khan
New America
William James. The Varieties of Religious Experience
Paul on the Road to Damascus, Acts 9
Antonio Gramsci. The Prison Notebooks
Niccolò Machiavelli. The Prince
—. The Discourses on Livy
E.E. Schattschneider. The Semisovereign People.
Karl Marx. Capital Vol. 1
James Joyce. Ulysses
The Bread and Roses Strike of 1912
“What the woman who labors wants is the right to live, not simply exist — the right to life as the rich woman has the right to life, and the sun and music and art. You have nothing that the humblest worker has not a right to have also. The worker must have bread, but she must have roses too. Help, you women of privilege, give her the ballot to fight with.” – Rose Schneiderman
Aristotle. Nichomachean Ethics
Walter Benjamin via Susan Buck-Morss. The Dialectics of Seeing
Percy Shelley. “The Masque of Anarchy” (1819)

With folded arms and looks which are

And if then the tyrants dare,

Let them ride among you there;

Slash, and stab, and maim and hew;

With folded arms and steady eyes,

And little fear, and less surprise,

Look upon them as they slay,

Till their rage has died away:

Then they will return with shame,

To the place from which they came,

And the blood thus shed will speak

In hot blushes on their cheek:

Which in sleep had fallen on you:

Ye are many—they are few!

Narendra Modi and the RSS
Neoliberalism definitions:
Philip Mirowski’s “Thirteen Commandments of Neoliberalism”
David Harvey: “Neoliberalism is in the first instance a theory of political economic practices that proposes that human well-being can best be advanced by liberating individual entrepreneurial freedoms and skills within an institutional framework characterized by strong private property rights, free markets, and free trade. The role of the state is to create and preserve an institutional framework appropriate to such practices.”

“With great power there must also come– great responsibility!” 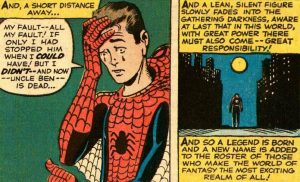