Faculty Interview: Jude Webre on the Politics of Immigration

From Jamestown to DACA, there has been a near constant tension within American political life between an understanding of the Republic as a transformative “nation of immigrants” and more ethno-nationalist notions of White Christian dominion. On the one hand, immigration has been crucial to the growth of American capitalism and democracy; on the other, a persistent nativism recurs in xenophobic policy proposals and expressions: selective quotas, travel bans, aggressive deportations, and struggles over the definition of “whiteness.” In advance of his upcoming course The Politics of Immigration, faculty member Jude Webre sat down with BISR to discuss the history, conditions, and contradictions of American immigration politics. How does the American myth of immigration square with actual immigration politics and history? How have immigrants figured in the long struggle between labor and capital? Has immigration over its long history contested or reinforced prevailing racial ideologies?

The United States is commonly referred to—we commonly refer to ourselves—as a “nation of immigrants.” How accurate is this phrase? How does the foundational myth of inclusivity, of the “melting pot,” square with the political history of American xenophobia, quotas, and white anglo-protestant supremacism?

Well, in a strict sense, the territory that now makes up the United States has been a landscape of immigrants since Spanish settlers came to New Mexico in the 16th century. Setting aside the forcible displacement of Native Americans (themselves long ago immigrants from Siberia, but that’s another matter), this landscape was settled—sometimes peaceably, sometimes violently—by a rich variety of cultural groups and obviously Africans against their will. There were Spanish and French Catholics in the Southwest and Mississippi Valley, German dissenters in Pennsylvania, Dutch Reformed and Spanish Jews in New York, Scotch-Irish in the Piedmont of the Atlantic Coast, and of course the English colonists in New England and the Chesapeake region. This was all before 1776. The creation of the American nation and a politics “conceived in liberty and equality” that flowed from the Declaration of Independence and the Constitution raised the stakes around questions of citizenship and territoriality, not to mention basic liberty for a large minority of the population. 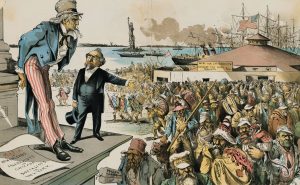 I would say xenophobia as a major political phenomenon emerged with the migration of the Irish because of the Potato Famine in the 1840s. The nativist politics of the early 1850s—most famously the Know-Nothing Party and Millard Fillmore’s candidacy for president in 1856—went a long way in the construction of a white Anglo-Saxon Protestant politics of middle-class respectability that lay at the core of the Republican Party, even in Lincoln’s time. Some of these were Jacksonian Democrats of the previous generation, the white democracy created by the extension of male suffrage in the 1820s. But curiously, as fierce as their anti-Irish nativism was, this group was also strongly anti-slavery (although not anti-racist). Why then and not earlier? I think it’s arguable that this is the moment of industrial take off and a zero-sum labor market in the Eastern cities. Land was still available out west, but for the poorer strata in New York, Boston, and Philadelphia, the Irish were direct competition for wage-earning jobs right when traditional artisanal labor was being deskilled in favor of factories. The passions of labor politics for some were displaced onto the immigrant other, whose religion, insularity, and convivial mores fit into existing stereotypes of dependency, licentiousness, and criminality. The battles of Five Points depicted in Martin Scorsese’s Gangs of New York (2002) are perhaps the most vivid popular image of the frontlines of this conflict, but a broader middle-class across the North found common cause against the Irish.

In some sense, this core dynamic of inclusivity/exclusivity has been an ever-shifting boundary depending on who are the newest immigrants and which “native Americans” (irony intended) are protecting their hard-won privileges. Irish and Germans were later able to attain some slightly higher status in contrast to Italians, Slavs, and Jews. And most or all of these “white” groups were able to find shared nationality during and after World War II against African-Americans, Latinos, and waves of new immigrants in recent decades. Interestingly, the idea of the “melting pot” has WASP undertones in that the concept (c. 1910) was that immigrants would melt their prior cultural identities into an Anglo-Saxon base metal – the idea of assimilation. Around that time, the cultural critic Randolph Bourne proposed a counter ideal of a pluralist “transnational America” that preserved cultural distinctiveness alongside creative fusions of different cultures – for example, the fusion of klezmer and early jazz. His ideal is perhaps a model for the rich, if elite, pluralism that was taking shape during the Obama era.

How does immigration figure in labor politics and in the contest between workers and capital? How have immigrants been treated historically by labor, and has xenophobia been a hindrance to labor in its struggles against capital?

I think the important question to ask here is “which workers?” In the current moment, a certain kind of Rust Belt industrial worker, who are trying to hold onto gains of a previous era, are rallying around immigration restriction in the face of de-industrialization and globalization – a feeling exploited by conservatives who claim to represent their interests. And again, as in the 19th century, many of their nativist fellow travelers live in small towns scarcely affected by competition from immigrant labor. This is where it feels to me like Trumpism is giving vent to an expressive politics that is powered by a long-established ideological field.

The core of nativist politics has always been economic because of the reality that capital is interested in driving down wages and avoiding workplace safety measures. So the waves of immigration in the late 19th century that are perhaps the most fabled in our American Tail-version of immigration reflected the huge demand for cheap factory labor that could not be met by the existing population. Immigrants were drawn from a broad peasant periphery that extended to Russia and Sicily. While these immigrants were by no means embraced, their movement was not impeded by the immigration restrictions and hard borders that are now the third rail of our politics. But even during this period, labor was divided between skilled workers in the AFL, who fought hard to establish their basic privileges from management in 1880s and ‘90s, and this new generation of immigrants, who made up the unskilled industrial workforce that remained largely unorganized (except as Socialists) until the rise of the CIO in the 1930s. Samuel Gompers, the longtime leader of the AFL, was famously lukewarm in his support for unskilled workers from Southern and Eastern Europe, which made a big difference in the details of legislative horse-trading. As a result, the first set of restriction quotas in 1924 were weighted heavily against this same lower echelon of immigrant workers from Southern Europe.

In many ways, the debate over skill remains front and center, as even the Trumpists are willing to accept educated immigrants (likely under pressure from Silicon Valley) while casting out or restricting those less skilled who have been much more the norm in the history of immigration. Interestingly, Chinese immigrants, who were the only legally restricted nationality in the 19th century (due to nativism in California), have now achieved the status of “model minority” that was extended to many Asian groups beginning in the 1960s. The one consistency is that the demands of business (in this case, high-skill technology jobs) are balanced by the votes of petit bourgeois constituencies who are put in the position of defending their previous gains, whether status or benefits.

In the historical imagination, the archetypical immigrant is was a European. In earlier phases of American immigration history, the European immigrant, usually Irish or southern European, was often demonized (and regarded as non-white); whereas today he/she is taken to be the “good” immigrant (in contrast to “illegal” people of color). How has immigration to America contested or reinforced prevailing racial ideologies? What dynamic exists, or has existed historically, between immigrant populations and African-Americans (whose by-and-large forced migration to America has seemingly positioned them outside the immigrant imaginary)?

Well, the footnote to my earlier story about nativist discrimination against the Irish was that it drove the Irish into the slaveholders’ Democratic party. The “lords of the lash and the loom” as they were called (Democrats who made their wealth from the cotton economy) were happy to accept the votes of the well-organized Irish constituency of Tammany Hall, which led to a fiercely racist coalition. The famous Draft Riots of 1863 were in no small part an Irish lynch mob directed against black New Yorkers. So as these things often go, the despised Irish had one level below them in the hierarchy to despise, which were African-Americans. Du Bois wrote about this in Black Reconstruction in the chapter “White Worker.” To his mind, this divide among workers along racial lines had huge implications for the politics of Reconstruction. Support for making the freed slaves into full economic and political citizens always met resistance from the conservative formation of Southern elites, some Northern capital, and white workers, both in Northern cities and among the white yeomanry of the Jim Crow South. This had been the alliance struck between planters and yeoman farmers in the antebellum South – that white farmers were independent and superior to slaves however impoverished their lot. Now it extended to the industrial era after the Civil War, allied with key working-class constituencies in the North.

I was teaching the Fugitive Slave Act last week, and was struck by the remarkable parallels between rendition and federal power then and the current ICE regime. During the 1850s, slaveholders used federal marshals acting under the law to seize and return slaves to the South, with very little due process and often years after their escape (and in some cases under false pretenses). There are literally stories at the time of long-established family men taken away in the night, stories that helped inflame the Northern public against slavery. The common element here, it seems to me, are unapologetically anti-democratic monied interests using federal power to make an issue of the illegitimacy of racial others (free black persons then and illegal aliens now), for reasons of ideological spectacle as much as any practical purpose. The number of escaped slaves was relatively negligible, but the slaveholders wanted to make a point about their control of the federal government. Inasmuch as the Stephen Millers and Tom Cottons of the world are trying to remake our society in white nationalist terms, the ICE raids serve as performative gestures, however grisly, to go along with policies curbing legal immigration. The demographic and cultural tendencies that contributed to and are to a degree symbolized by the Obama presidency are a threat to both leaders and followers of a conservative formation that goes back in my view to the antebellum South of John Calhoun. Alabama National you might call it. Demographically, conservative elites know they are losing ground so they deploy every procedural tactic to preserve their constituency. But Southern planters were always at a disadvantage demographically, so this is an old game. In this respect though, the uses of state power in Ferguson and ICE raids have converged—racial ideologies against African-Americans have come to encompass immigrant others, almost always non-white—which was Du Bois’s point about the global color line.